Internet Arcade: The Three Stooges In Brides Is Brides 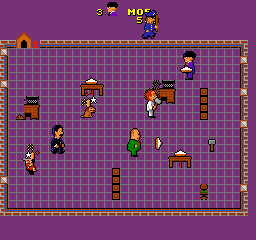 Internet Arcade: The Three Stooges In Brides Is Brides

The Three Stooges, fully titled as The Three Stooges in Brides is Brides on the title screen, is a 1984 arcade game by Mylstar Electronics. It is based on the comedy act of the same name. Gameplay The game features digital voice samples. At the start of the game, up to three players control Moe Howard, Larry Fine and Curly Howard. Players must help the Three Stooges find their fiancees, Cora, Nora and Dora, who were kidnapped by the Mad Scientist. In all rooms, players must find the three hidden keys that unlock the exit. Interfering socialites and cops are dealt within typical Stooges-style: face slaps, hammer hits, and the ever-dependable cream pie throws. In the bonus rounds, players must avoid the sour notes of the opera singer, as well as cops, while collecting the three keys to the exit. In the Mad Scientist's laboratory, the players will be able to save only one fiancee, before players must find the other two fiancees. After all fiancees are saved, the game starts over.

In The Three Stooges, Curly, Larry and Moe go through various places in search of their fiancees - Cora, Nora, and Dora - who've been kidnapped by a mad scientist.

To rescue them, they must go through multiple stages in search of three keys to open the exit and proceed to the next area. They can use pies and hammers to stun any socialites and cops that get in their way, while using the hammers to destroy furniture and retrieve the keys. But they have to be careful, because if a cop catches them, it's game over.

The game can be played by up to three players; if there are fewer players, the computer will control the other Stooges.

Reviewer: DantesWolf - - April 26, 2018
Subject: This game does not work
I tried loading this several times and does not give me anything but a blank screen. Windows 10 user. Google Chrome is up to date
Version 66.0.3359.117 (Official Build) (64-bit)
Reviewer: MeekinOnMedia - favoritefavoritefavoritefavorite - March 1, 2015
Subject: Smash...Stooges?
Bright and colorful, silly and ribald, and with the bonus of not having to pop a quarter in every time you wanna play - I gotta say this game is pretty splendid.

Obviously it's old and dated, too - but collecting keys, hammers, and throwing pies is a delight, and it ran pretty well on a crappy PC using Windows XP.

Worth a shot - lots of fun!